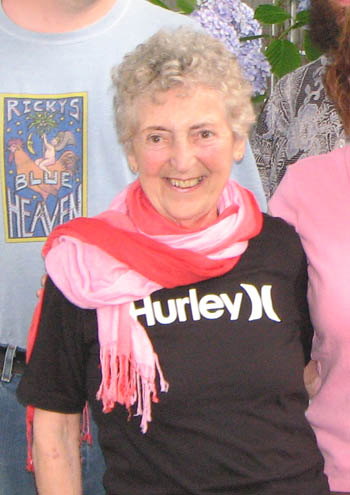 My grandma died comfortably and peacefully tonight. Her name was Louise Hurley Sweeney, but to me she was always “Nonny.”

For me, it’s hard to feel low as I think about her, because the truth is that Nonny had such a positive impact on me, as she did with so many others. She inspired me with her dedication to causes of love for those known and unknown. She was a patriot- not the kind distracted by the jingoistic farce of American exceptionalism, but rather someone who consistently advocated the ideals of justice, equality, and prosperity for all humankind.

For me, Nonny served as someone whose style wasn’t so much to encourage me from the sidelines, but to get involved with just the right bit of helpful information or a pressing question to make me realize something I hadn’t thought of before.  Ever the journalist, she was always helping me with my writing and photography skills. Strunk & White’s Elements of Style, a gift from her, has a dedicated spot on my desk. (And I used it to make sure I had properly formatted the reference to its title – a habit she would encourage.)

This year, she continued to inspire me with her strength as it was discovered that she had esophageal cancer. Though not going so far as to be in denial about its seriousness, she prepared for treatment and subsequently beat the cancer, and showed many good signs during her recovery. It was just last week that she’d gotten enough strength back to be doing the dishes herself. It took complications with her digestion and a bout with pneumonia to finally get the best of her.

Even the way Nonny died is a testament to the things she did right in life; she spent her last days surrounded by her husband, all five of her kids, several grandchildren (including me via the miracle of the Internet), and some very good friends who are as good as family. Many told her stories, we played her songs, and my aunts got to give her the pedicure she always wanted. I have great photos of her with giant grins with various family members that I will hold close to me for a long time.

I know I am just one of many people for whom Nonny’s love had such a positive effect on their lives. It’s geeky of me, but Star Trek: The Next Generation really gets my feelings right:

“Death is that state in which one exists only in the memory of others, which is why it is not an end.  No goodbyes, just good memories.”

Nonny has made a lot of good memories for a lot of people- so she’ll live on quite richly in the minds of many people. I loved her so much, and will miss her presence as I move ahead.