2011 is my upgrade year for the “main machine.” I had been spending a while trying to figure out the best fit between performance and portability, and had settled on the $2,199 15″ MacBook Pro. But I ended up going with the $700 cheaper 13″ model and investing less than half the savings in some great custom additions: 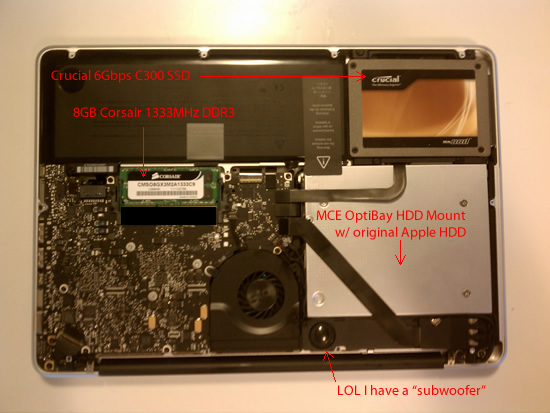 At the end of the day, I have:

I came in almost $300 under my originally planned purchase, and got the added benefits of a more portable system and a blazing-fast SSD. I simply cannot believe how much of a difference the SSD makes; I’d guess that many people would feel like their old computers were brand-new if they installed an SSD. My system boots in mere seconds, and almost all applications load instantaneously. (Big ones like Photoshop take a couple of seconds.) I was really happy that I could get rid of the DVD drive and keep my capacious media drive with me with the MCE OptiBay (though it has pretty bad shock protection and a couple of big screws that hopefully aren’t digging into the unibody’s lid.)

The only hard part is getting used to the glass-covered 1280×800 screen. There is no matte option for the 13.3″, and it’s sheer marketing evil that Apple offers better resolution on the 13.3″ MacBook Air while forcing Pro buyers up a price notch to the 15.4″ to benefit from a high-res display. The glass covering the display is… interesting. Yes, it has more vibrant colors, but it also has terrible glare, and is also a major fingerprint magnet to boot.

So I’m pretty happy with it, all things considered. I’m very surprised with just how much performance can be squeezed into a 13.3″ package- except for the requisite screen size difference, this is a no-compromise high-performance device suited to be my only PC, and it’s under 5 pounds and an inch thick. I feel like instead of paying more for a V8 BMW, I bought a cheap little Honda Civic and gave it a killer turbo while keeping the weight low.

For others looking for a new computer, I recommend: