I just turned on the new Facebook Timeline as per this howto guide.

I don’t know how much people will use it, but wow, they’ve made memory lane a whole lot richer of an experience. There’s tons of stuff to look back on that I wouldn’t have had thought to document myself.

Also, I was worried that some of the new ways you can share with friends in realtime wouldn’t be implemented effectively. But as soon as I clicked a Spotify “play” action, I was presented with this simple menu: 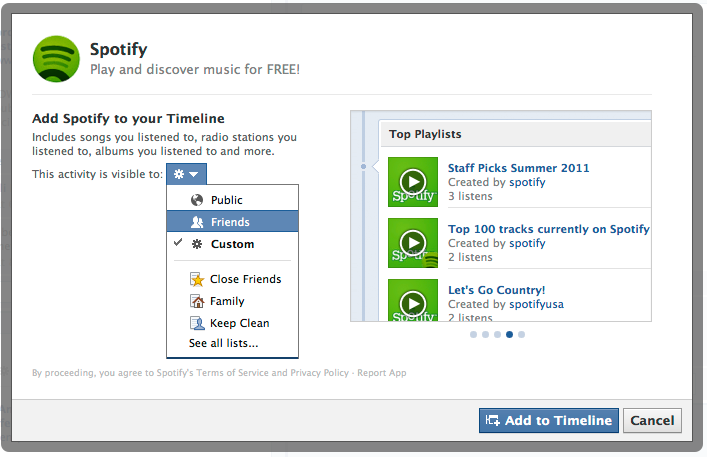 I was cautious because of Facebook’s previous missteps when sharing data from other services, but it looks like they really understand that people want to make decisions about what to share with whom, and they especially don’t want that decision made for them.

Third party sites and apps that posted things to the Facebook news feed before now were usually limited to just links, or if you had some serious savvy, perhaps some slightly richer media. But there were always rumors and anecdotal experiments which implied that Facebook treated data from third parties like second class citizens, not to be shown as prominently as content posted through Facebook’s own apps. This will clearly change with the new Open Graph and timeline – developers have way more control over how to import their media into Facebook, and can publish third party content to Facebook in a much richer way as well.

It’s kind of hard to explain, but here’s an example that comes to mind: I have a presence on several social networks, but I don’t entrust any of them with the stuff that’s most important to me: my blog and photos. That stuff is so important to me that I host it myself, even when some other companies’ services might provide me a nicer experience or a bigger network of my friends. To compensate for the interaction I lose by putting this stuff on my domain, I use RSS-based tools to post content from ZekeWeeks.com to Twitter, Facebook, and hopefully Google+ soon. But it’s always just a dumb link, perhaps with a thumbnail and an excerpt, whereas my Facebook subscribers would see a rich photo gallery or video if I had decided to put it all in Facebook instead.

Well, no more. With Open Graph, I can choose to exist outside Facebook without sacrificing the rich sharing inside Facebook. I can’t wait to see individuals and groups start taking advantage of this in a way that opens new possibilities to them, instead of locking them into a proprietary platform.

That said, I have no idea how this stuff is going to play out in reality. There are tons of question marks about it still. And Facebook has a huge amount of existing users who may have a trouble with a paradigm shift on an existing network that they’ve already conceptualized in a fixed way.